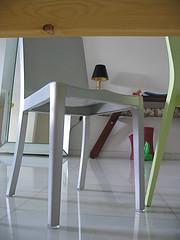 Beyond considering the question, also it is explained that, in developing of the activity, two types of couples of rabbits will appear: a young couple represented by rabbits of lesser stature and an adult couple formed by bigger rabbits. Below of the space of the texts, it appears the information of the number of couples to each time that the pupil to advance on the period of twelve months, beyond one another number informing selected month, being this last of sequential form with beginning in January and ending in the December month. In a bigger screen, to the side rabbits in the two described forms appear above, that they generate the total number of couples in one determined month, as illustrates the figure 1. figure 1: Screen of the animation where it is possible to visualize the growth of the number of couples of rabbits during a period of twelve months. Development of the education experience the didactic work, source of this story, was developed in phases.

In the first phase, the object of digital learning was presented the pupils and had been explained the forms to lead the simulation. After the reading of the referring biography the Leonardo de Pisa, suggested it the pupils the formularization of a table called for period of reproduction of the rabbits. This table was divided in four columns, that had for purpose to separate information of the type: months of the year, couple of young rabbits, couple of adult rabbits and total number of couples (figure 2). figure 2: Table period of reproduction of the rabbits For the construction of the table, the pupils had been guided to fill with data observed in elapsing of the animation and requested that they reflected on the information that composed the table. Some questions had been proposals for the reflection of the citizens, initiating for the fact to have or a dependence of the numbers of a line of the table with the ones of the previous line and not locking up with the questioning of the possibility mathematically to write the situation presented for the natural phenomenon.